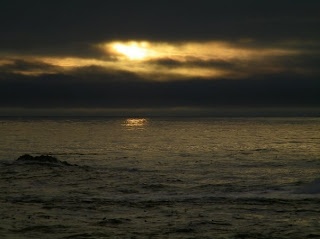 I have been at Presbytery all day. The worship was beautiful, in fact one of the songs we sang was one I posted on my blog recently, Grace like Rain. Fellowship was great but I am sad tonight because we failed to pass a motion to join with San Diego Presbytery “in overturing the 219th General Assembly to:

Issue an authoritative interpretation of G-6.0106, ‘Restoring to full force and effect the authoritative statements concerning ordained service of homosexual church members by the 190th General Assembly (1978) of the United Presbyterian Church in the United States of American, and the 191st General Assembly (1979) of the Presbytery Church in the United States and all subsequent affirmations including the Bush vs. Pittsburgh Presbytery (218-10) PJC Decision.”

I thought I had written the vote down, I didn’t-but it seems quite a few people did not vote. As I stated the orthodox and evangelicals lost the motion.
The debate was centered around the thoughts of shall we be totally inclusive or shall we follow biblical standards.

One of the things that disturbed me was that the Covenant Network (One of the Groups pushing the ordination of practicing homosexuals.) had a table set up with displays. And that in my church, Fremont Presbyterian USA, where we do not push for ordaining practicing homosexuals and, this is important, feel that homosexual sex is sinful. I am thinking about finding out if both Theology Matters and "Voices of Orthodox Women" can have tables at our next Presbytery meeting. Maybe even "Presbyterians Pro Life."

So tomorrow is the Lords day and I am tired so here is some music for me and for anyone else who likes it.
"For the Lord is our judge,
the Lord is our lawgiver,
the Lord is our king;
He will save us-
Your tackle hangs slack;
it cannot hold the base of its mast
firmly,
nor spread out the sail.
then the prey of an abundant
spoil will be divided;
The lame will take the plunder.
And no resident will say, 'I am
sick',
the people who dwell there will be forgiven their iniquity. (Isaiah 33:22-24)

The presbytery did balk and whine, but in the end they backed down. But the whole debate about that is part of what pushed FPC Aurora to leave the denomination...

Toby,
I am not sure who gave them permission to do that. There was also a peacekeeping booth but I have no trouble with that it is a PCUSA organization. There was also something that Fremont had up-I can't remember what it was however. But in my books the Covenant one should not have been there. In fact one of the ministers from Davis-whose head pastor is on the board of the Covenant, during the debate on the motion mainly stated that he was weary of the battle. My question to him would be then why bring all of that into our Church?

I still remember the time at a Mission Presbytery meeting that I went around with my backpack full of New Wineskins DVDs, placing them all over the church where we gathered...

We just have to be bolder, more courageous, more innovative and more provoking then the other side. After all, WE are the ones with a message that actually liberates people. So, let's act like it and not back down to intimidation.