Donald Trump, allowing himself to be an idol: playing with the Führer Principle

I am troubled by a presidential candidate, Donald Trump, as I have never been troubled before. I am a Democrat who almost always votes Republican because of my concern for the unborn. Now there are other moral concerns, religious freedom being one of them.
Dietrich Bonhoeffer wrote and spoke about the authoritarian leader just as Hitler became the “democratically elected chancellor of Germany.” As Eric Metaxas points out Bonhoeffer had not planned his radio speech as a confrontation. It was written earlier.[1] Speaking of a leader reaching beyond the authority of the office, Bonhoeffer stated:


“If he understands his function in any other way than as rooted in fact, if he does not continually tell his followers quite clearly of the limited nature of his task and of their responsibility if he allows himself to surrender to the wishes of his followers, who would always make him their idol—than the image of the Leader will pass over into the image of the mis-leader, and he will be acting in a criminal way not only towards those he leads, but also towards himself.”


It follows, according to Bonhoeffer, that the leader must, “lead his following away from the authority of his person to the recognition of the real authority of orders and offices. … He must radically refuse to become the appeal, the idol, i.e. the ultimate authority of those whom he leads.”


Now it is true that many of those seeking office, both Republican and Democrat, need to be reminded of who they really are, in the presence of God, simply office holders chosen to serve the people. But in Trump, one finds a need to be the ultimate authority mingled with immorality and dishonesty. Those who follow him, follow a lie. And those who desire to follow truth shudder because of those who follow the lie.


Still, there is a beautiful, biblical picture of a leader who has all authority but who is truly goodness incarnate. The leader is found in Psalm 72. A Psalm that was either written by Solomon or his father David. Scholars are uncertain.[2] It is a king’s prayer to be a righteous yet gracious ruler, something that neither man, although they were great men, were able to accomplish. And in this Psalm one clearly sees the beauty of the ultimate, King, the messiah.


The prayer is that the king will judge his people with righteousness “and the afflicted with justice.” He will save the children and still crush the oppressor. He is like rain is to mown grass and “like showers that water the earth.” Everything flourishes because of his reign. There will be peace and those who are righteous will flourish.


“His rule is from sea to sea.” It is to the ends of the earth and all kings (and presidents) will in the end bow down to him. His compassion is perfect:


“For he will deliver the needy when he cries for help, the afflicted also, and him who has no helper. He will have compassion on the poor and needy, and the lives of the needy he will save. He will rescue their life from oppression and violence, and their blood will be precious in his sight. ..”


The Psalm goes on to praise God for his wonders and glory.


Many years ago, in a sociology class, the professor asked us to take a quiz to help him with a project he and some other professors were conducting. The quiz consisted of choosing between two different actions we would take, at first a good action or a bad one. But as we went further into the test both actions to choose from became bad. Finally I returned the quiz to the professor, telling him I could not finish because I could not choose either action. This election is the same.


I hope and pray that many of us, who are Christians, if we must, will not vote, but will instead cling to that One who will and does reign in righteousness.

Tossing away the Father's love for the sake of a goddess

One does not kneel down on the dark sands of the world preparing for death for the sake of a mother goddess who turns out to be nothing more than creation including ourselves. The recent martyrs of the Middle East and elsewhere breathed the beautiful name of Jesus before laying down their lives. And in fact, one does not go about living a life that is rimmed by joy without holding onto the one for whom and by whom creation was spoken into being. (Col. 1:15-20)


Recently, on Facebook, because a progressive pastor who is a friend, ‘liked’ a link entitled, “When you’re sick of Father God,” it appeared on my timeline. It was originally linked to by the “Girl God,” but that is another posting. My concern is, Tarrin McDonald aka Tarrin Nicole, who has walked away from Christianity because of her unbiblical views of God. And she was helped on the way by reading the book The Dance of the Dissident Daughter by Sue Monk Kidd. Kidd is also a person who once claimed Christianity but has since turned away to embrace the goddess.


McDonald wrongly, calling herself a Christian, focused her faith on the idea of gender in terms of the human male. She writes:


“I had taken male and masculinity to be the highest good, forsaking everything beautiful and feminine within myself, my culture, and my religion. I didn't realize I had been crippling myself my whole life by buying into male domination.”


But McDonald, in her revolt, reverses her error. She makes the feminine the highest good. And because this includes a rejection of the biblical God, everything gets tossed.


For McDonald, the goddess is equated with the self and the self is considered good without need of redemption. McDonald writes, “I wanted to reclaim my inherent feminine divinity.” This reclaiming involves unremitting self-analysis, and she has actually become what she calls a ‘soul coach’ for other women.


There is a grave misunderstanding here. God is not a gendered God in the same way we think about gender. But God names himself and he calls himself Father to Israel in a particular way and the Father of the begotten Son in a special and unique way. He is also Father to the poor, the oppressed, the needy, and Father to his own children by adoption, that is, the Church. And God’s fatherhood is something unique to him—we are not the model—but he is.


Toward the ending of her essay, McDonald affirms one of Kidd’s blatant quotes, writing that she loves Kidd’s conclusion:


One, as I stated at the beginning, does not lay down their life for the sake of a goddess who can be equated with their own desires and the pursuit of self-fulfillment. The ultimate authority for the Christian is the Lord of the church, Jesus Christ, and the written word of God, the Bible. The sustaining of our joy and peace occurs as we abide in the Lord, feeding on his word, living in obedience and trusting him to forgive and transform us into blessed and holy creatures.


Therefore I urge you, brethren, by the mercies of God, to present your bodies a living and holy sacrifice, acceptable to God, which is your spiritual service of worship. And do not be conformed to this world but be transformed by the renewing of your mind, so that you may prove what the will of God is, that which is good and acceptable and perfect.” (Romans 12:1-2)

Posted by Viola Larson at 12:28 AM No comments: Links to this post


The letter was written by the administrative commission that was assigned to Journey on Saturday, January the 30th. Besides the rudeness of sending this letter out to those who are now members of Hope Presbyterian Church (EPC) there are several other glaring problems.
While expressing their affirmation of those who believe they must leave the PC (U.S.A.) the authors of the letter have offered nothing. Their intent, which succeeded, was to send a people away without property or money because they chose biblical authority over human desires and experience. I am thinking now of James 2:17.
The letter writers state that, "Pastor Huusko, the session and some members of the congregation are leaving  Journey Church effective, February 1, 2016. They are forming Hope Presbyterian Church under the Evangelical Presbyterian Church denomination."(Italics mine.) The negotiating team and now the AC have been and are reluctant to admit that there are a majority of the past members of Journey who opted to leave.
On Sunday morning, the 31st, over 160 members registered as charter members of our new church. Many others, who are not yet members of Journey asked to sign. They will be members when they go through a class and are received into Hope. God has truly blessed us with wonderful enthusiastic people.
Toward the end of the letter the authors write:
"There may be some of you who are not yet sure what you want to do or how the Holy Spirit is leading. We would encourage you to take all the time need. Please do not feel pressured into making a decision on anyone else's timetable but yours and God's. You may even decide to attend both services for awhile until you sense where the Spirit is calling you. Our hope is that in the end we can see two effective churches emerge out of this situation, who can serve God in the Folsom community and reach out to all who need to hear the good news."
Can you imagine sending this letter to those who are now already members of the new church? This is truly unacceptable. Except for a few truly gracious persons, the discernment team, the negotiating team and now the AC have harassed members of session and even the congregation. At the very first meeting of the session with the discernment team the chair suggested that we should just turn our keys over to her. She reminded us of this before the congregation at a meeting when she also chaired the negotiating team.
I wrote earlier of the freedom of coming away from the control of an apostate denomination, and it is freedom no matter the harassment. That freedom belongs to those united with Christ in his life death and resurrection. St. Paul wrote of Christ's exultation in heaven and then places us with him by adoption:
"But God being rich in mercy, because of his great love with which he loved us, even when we were dead in our transgressions, made us alive together with Christ (by grace you have been saved), and raised us up with him in the heavenly places in Christ Jesus, so that in ages to come we might show the surpassing riches of his grace in kindness toward us in Christ Jesus." (Ephesians 2:4-5)
This is a freedom that places us beyond the manipulations of the Enemy of God. God will continue on with the good work he has begun. We are free to be free in Christ. No one can touch that. 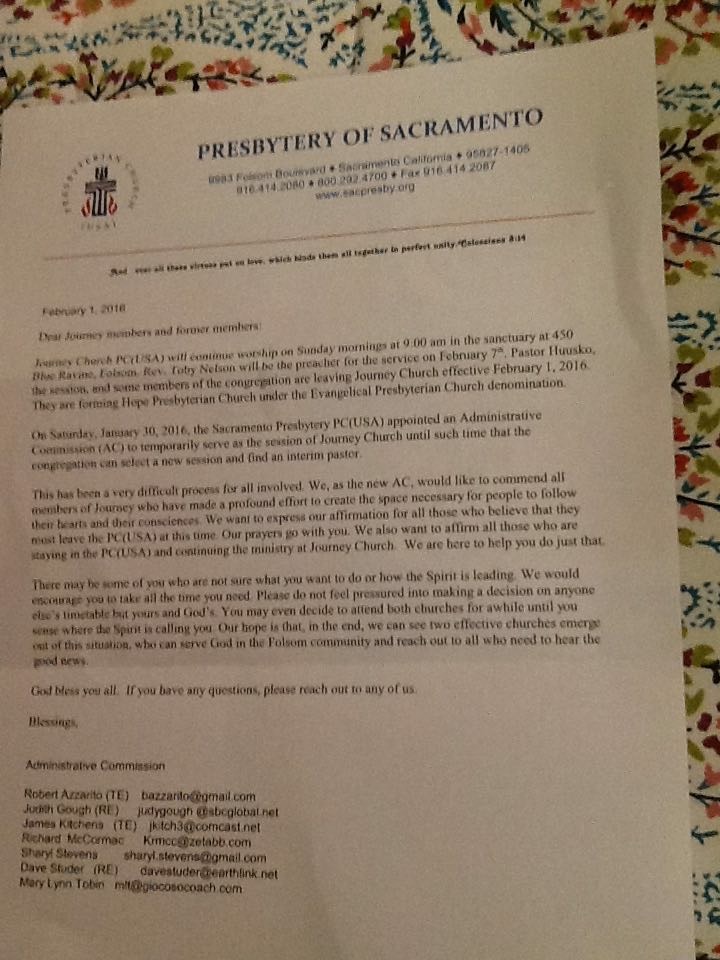