What does God in creation mean biblically? 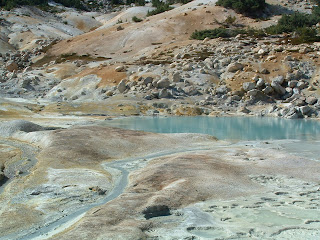 I began this writing more than a year ago and have now retrieved it as I am preparing to help teach a class on ethics. Tomorrow I am helping by explaining panentheism, so I did a quick finish of this and will post it. My thought is to show the difference between the Christian Theist’s view of God’s transcendence & immanence and the Panentheist’s view of God . (Picture by Jenny McHenry)

Andrew Purves and Charles Partee in their article, “A Name is Not a Metaphor: A Response to ‘The Trinity: God’s Love Overflowing,” in Theology Matters (Mar/Apr 2006), write an intriguing comment:

The Report [The Trinity: God’s Love Overflowing] concludes our language can only point to a mystery the language cannot itself connect with; at worst, God really remains hidden, speechless, and unknown. If God is really mute concerning himself and his name, then we can invent God in our own image, or in the image of the relevant ideology to which we feel drawn. We have here the smiling face of Friedrich Schleiermacher behind which is the looming dark shadow of Immanuel Kant.

Immanuel Kant believed that we cannot know the ontological being of God, that is we cannot know how God is in himself, we can only experience God. In my view, he is dark and looming because, bowing to the twin ideologies of Deism and Enlightenment reason, Kant cuts humanity off from divine revelation.

Just as all philosophy is considered a footnote to Plato, so most of modern and post-modern philosophy and religion could be called a footnote to Kant’s many “antinomies.” That is Kant created, as John W. Cooper, puts it, “unresolved oppositions.” These include, “a chasm between God and the world.”1

A great deal of modern panentheism has developed from the theology or philosophy of those attempting to solve the problems connected to Kant’s antinomies. It is not Kant or his problems of opposition, I am particularly interested in, but panentheism and the difference between that and the Christian & biblical understanding of the immanence of God. To put it into a question, how is the God who is both transcendent and immanent different from the panentheistic God?

I raise this question for several reasons. I note on several blogs that the difference between God’s immanence and panentheism is often blurred by both writers and those who comment on their blogs. For that reason there is a lot of confusion surrounding many issues.

I also want to address this question because I find many progressive theologians and their followers are, seemingly, promoting a different God than the biblical God. And some people who follow in their footsteps become confused believing that the idea that God is in creation, and creation is in God is the same as panentheism. There is a difference.

The biblical understanding of God is that he is transcendent (other than creation) and his immanence (his relationship with creation) is based in his transcendence. That is, as a transcendent God, who is sufficient within his trinitarian being, he chose to create out of nothing. His being did not necessitate him creating so his creating activity is from grace, as is his redemption of earth’s fallen humanity.

Panentheists generally understand creation to be a part of God. Creation is a part of God but, unlike pantheism, God is more than creation. Panentheism posits a God who must create because creation or creating is a necessary part of who God is. In that case to say that God is in humanity and humanity is in God takes on a completely different meaning than Paul’s words to the Athenians, “for in Him we live and move and exist” (Acts 17:28a).

This is a reversal of Christian theism. In this scenario God’s transcendence comes from his immanence. That is, differences in God are shaped by his interaction with creation.
In the first understanding of God, Christian theism, God reaches out in grace to what is other than himself. In the second understanding of God, Panentheism, God can only give and take out of his insufficiency.

The biblical understanding of the Trinity, the Incarnation and God’s redemptive grace are more clearly and cogently seen in Christian theism than in panentheism. A sufficient God can choose to freely give, can take on humanity and bring human sin to the cross. Beyond this, a God unshaped by humanity, yet, loving, good and eternal is not only sufficient within himself but is our sufficiency as we turn our lives over to Jesus Christ.

Very good points Viola, though I probably would have come at this issue from a different direction.

You might also want to clearly indicate that most panentheists have a view of God that is impersonal, while the God of the Bible is clearly personal (three persons) and not merely an impersonal force.

Adel I am aware that many, probably most panentheists hold to some kind of impersonal force or ground of being like Tillich. But there are a few "Christian" panentheist like Moltmann who hold to a personal God, however interestingly, Moltmann believes that the unity of the Trinity is worked out in the immanent trinity and is an evolving process.

I'm sorry Viola. I did not mean to insinuate that you were not aware of this, only that I did not see it indicated anywhere on you post. Nor was I aware that you were focusing exclusively on Moltmann. While I am far from an expert on Moltmann (or even a student of his writing), your statement about him and most of the assessments of him that I have read over the years indicate that while he claims his idea of God is personal and defends that, the ultimate outcome of his theology is still an impersonal God.

Adel,
I was not focusing exclusively on Moltmann. While I strongly disagree with Moltmann's view of God I believe he does posit a personal God. Not all wrong theology is devoid of a personal God. May I, if you are interested, recommend the book I have footnoted in my posting. Panentheism: The Other God of the Philosophers It is by John W. Cooper who as a professor teaches philosophical theology at Calvin Theological Seminary. His book covers a host of different Panentheists and process theologians and philosophers. And Cooper, who is reformed and a very Christian theist, in the last chapter explains why he is not a Panentheist. He makes a very good apologia for Christian theism over against panentheism. But on top of that he is very polite toward those he criticizes, something I can certainly learn from.

Also, I might add to interest you, he points out that while Jonathan Edwards was certainly a reformed Biblical Christian, he was in his philosophy a Panentheist, and probably because he was influenced by the Cambridge Platonists.