Holy Ones and Monsters 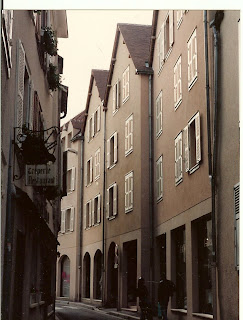 C.S. Lewis writes of those who are becoming monsters and those, who, as he puts it are becoming “everlasting splendours.” He is, in his essay “The Weight of Glory,” writing about how we help one another on our way, one direction or the other.
-
But Lewis was also writing about the glory of Christ which the Christian bears. He ends his essay with the words, “in him [our Christian neighbor] also Christ vere latitat—the glorifier and the glorified, Glory Himself, is truly hidden”. Christians are the holy ones because of the holiness of Jesus Christ.

Yet all of humanity, so to speak, either redeemed or unredeemed, moves on. Lewis writes, “It is a serious thing to live in a society of possible gods and goddesses, to remember that the dullest and most uninteresting person you can talk to may one day be a creature which, if you saw it now, you would be strongly tempted to worship, or else a horror and a corruption such as you now meet, if at all, only in a nightmare.” We are all traveling a direction. But once again it is only the righteousness of Christ that counts for anything. The new birth in Jesus Christ is the birth of a new creature meant to bear the image of Christ.

The stories of the birth of new creatures destined to be everlasting splendors are, except for the story of the Incarnation, the most beautiful stories. And both the story of the One who is Glory and the one united with Him are intertwined. Who can resist hearing of how Christ draws his children to himself.

C.S. Lewis’ story is a classic. He starts out on a journey, both a spiritual one and a physical one. His spiritual one covers several years leading from atheism to theism and finally to Jesus Christ. He writes of the night he became a theist:

“You must picture me alone in that room in Magdalem, night after night, feeling, whenever my mind lifted even for a second from my work, the steady, unrelenting approach of Him whom I so earnestly desired not to meet. That which I greatly feared had at last come upon me. In the Trinity term of 1929 I gave in, and admitted that God was God, and knelt and prayed: perhaps that night, the most dejected and reluctant convert in England. I did not then see what is now the most shining and obvious thing; the Divine humility which will accept a convert on such terms.”

But of his conversion to Jesus Christ, Lewis writes, “I was driven to Whipsnade one sunny morning. When we set out I did not believe Jesus Christ is the Son of God, and when we reached the zoo I did.” Of course there is so much more to this story. You can read about Lewis’ conversion and also of his prolific reading (an inspiration) in his autobiography, Surprised by Joy.

Joy Davidman, Lewis’ wife, had, as we all do, a different story. She was a Jewish American woman, a poet and at one time a member of the Communist Party. She was blacklisted in the McCarthy years.
-
One night in great despair and loneliness she experienced the presence of God. She writes, “There was a Person with me in that room, directly present to my consciousness—a Person so real that all my precious life was by comparison a mere shadow play. And I myself was more alive than I had ever been; it was like waking up from a long sleep.” Davidman went on to write that “I must say I was the world’s most surprised atheist.” [1]

For me I think the most beautiful conversion story is that of Frederica Mathews-Green. She was an agnostic and then tried Hinduism. And while it was the reading of a Gospel that brought her husband to Christ, as Mathews-Green puts it, God had to hit her with a two-by-four.
-
Traveling with her husband in Europe and Britain, Mathews-Green met Christ in a cathedral in Dublin. She writes, “One day in Dublin I looked at a statue of Jesus and was struck to my knees, hearing an interior voice say ‘I am your life.’ I knew it was the one I had rejected and ridiculed, come at last to seize me forever. It was a shattering experience from which I emerged blinking like a newborn, and decades later I still feel overwhelming awe and gratitude for that rescue, that vast and undeserved gift.”[2]

There are so many stories. Augustine hearing some one say, “take up and read.” The historian, Elizabeth Fox-Genovese, who last year went to be with her Lord, began her journey to Christ because of her moral outrage at abortion.
-
Lauren Winner’s conversion is one of the more interesting. As an Orthodox Jewish convert she began reading about the Great Awaking in New England, read a book about Southern fiction The Christ –Haunted Landscape and as she puts it “spent a lot of time wondering how to be both Jewish and Southern.” A dream about a mermaid figures into her conversion. The whole beautiful story combined with an equally beautiful mixture of Christian and Jewish devotional concepts can be found in her book Girl Meets God.

So the holy ones, holy because they wear the righteousness of Christ, are traveling one direction. The other direction is without Christ; is a rejection of Christ. It ends in the land of the monsters. There is an old hymn; some of the words are, “Going forth with weeping.” The weeping is for those who are striving hard to enter the nightmare.

[1] Taken from “The Longest Way Round,” in These Found the Way: Thirteen converts to Protestant Christianity, found in And God Came In: an Extraordinary Love Story: Joy Davidman Her Life & Marriage to C.S. Lewis, by Lyle W. Dorsett.

[2] See Facing East: A Pilgrims Journey into the Mysteries of Orthodoxy by Frederica Mathews-Green
Posted by Viola Larson at 7:36 PM

Will,
I just answered your tag. Thanks for your nice comments in your blessing.

One more thing plays into regeneration (conversion)--we also stop despising Christians. How many of us, who came to faith later in life, had to deal with the change in our hearts in regards to Christ's people?

I used to think that Christians were mindless, spineless idiots....

I guess that God took care of those cherished thought-idols, as He sent me to Lewis and Chesterton! :)

Toby,
That’s a great point. I remember listening to Billy Graham before I was a Christian and thinking what an idiot. (Well young teenagers think like that) A few months later I became a Christian and shortly after that heard Billy Graham again. I thought he was one of God's great men and still do.

Funny how your perspectives change.